Can I Eat S’mores Without Wrecking My Teeth? 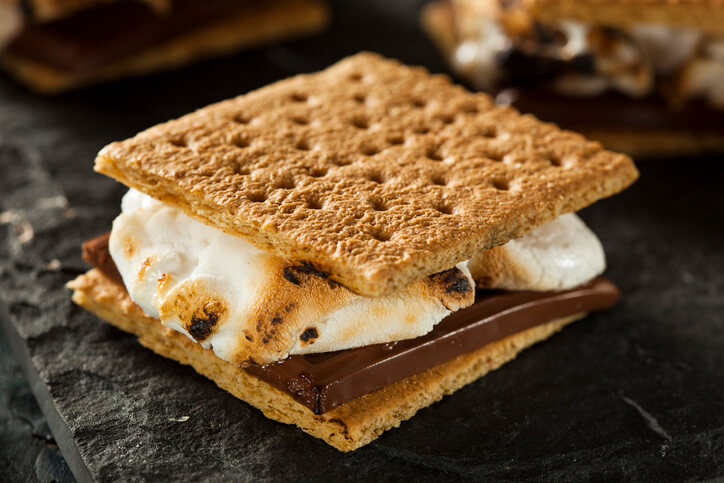 August 10 is National S’mores Day! And right now, you’re likely excited about having an excuse to indulge in that sweet, gooey summertime dessert - or you’re wondering what all the fuss is about. S’more…what? (Hate the whole S’more thing? No problem! There are plenty of other upcoming national food days to celebrate).

From Graham Cracker Sandwich to S’more

The snack that would eventually become S'mores first appeared in a cookbook in the early 1920s, where it was described as a favorite of Boy and Girl Scouts and was called a "Graham Cracker Sandwich." In 1927, a recipe titled "Some More" was published in a book called Tramping and Trailing with the Girl Scouts. Twenty years later, “Some More” had become “S’mores,” but nothing else about the "a sandwich of two graham crackers, toasted marshmallow, and 1⁄2 chocolate bar” had changed.

How to Make S’mores

Take a marshmallow, stick it on a toasting fork or some other cooking-appropriate skewer, and toast that marshmallow over the campfire until it’s golden gooey brown. Put a piece of chocolate on top of one half of a graham cracker, pop the marshmallow on, and sandwich it with the other half of the marshmallow. Enjoy!

Safety first, please: make sure whatever you use as a heat source for toasting marshmallows is OK. No campfire? There are many ways to make a S'more, including using a wood-burning fireplace, an oven, a stove's flame, a microwave, a panini press, or a firepit.

Are S’mores bad for your teeth?

The sad truth is that S’mores have no national value and aren’t the best choice for a smile-friendly snack. Here’s a rundown of the traditional S’more ingredients:

Marshmallows - The “marsh mallow” plant’s leaves and roots have been used medicinally for centuries. Along the way, humans also discovered that its sap makes a tasty, throat-soothing snack. Sounds healthy, right? Nope! By the end of the 19th century, the plant sap had been replaced with a much cheaper alternative: gelatin. Today, a typical marshmallow contains sugar, corn syrup, and gelatin, plus some air. And a gooey, sticky snack, the sugar clings to your teeth until you rinse or brush it away.

Graham Crackers - Early 19th-century New Jersey Presbyterian minister Sylvester Graham came up with these crackers, Atlas Obscura reports, in the hopes of convincing everyone to stop eating meat and otherwise enjoying themselves. So are the crackers he named after himself healthy? Nope. Graham crackers are relatively high in carbs and sugar per portion (typically about 8 grams of sugar per serving), and have little fiber and no significant nutritional value.

Chocolate - Finally, some good news! Over the centuries chocolate has been considered an aphrodisiac, a stimulant, food for the gods, and a healthy snack. We’re not sure about all of that, but it is true that - as long as you eat it in moderation and choose dark chocolate - you’re being nice to your body. Dark chocolate has flavanols which relax your blood vessels and improves blood flow. In turn, this also lowers blood pressure. Dark chocolate may even reduce your risk of diabetes. Plus dark chocolate is also a good source of essential minerals such as iron, magnesium, zinc, copper, and phosphorus (which can help keep your bones and teeth healthy).

Can I Eat S’mores with Braces?

It depends on what kind of braces you have, so ask your orthodontist or dentist what foods you can safely and comfortably eat. In general though, it’s best to avoid sugary, sticky, gooey and/or crunchy foods when you’re wearing braces. Biting into something hard or sticky can physically damage braces (loosening a wire or bracket, for example). And gooey, sugary foods can easily get trapped in your braces and cause cavities. If you really want S’mores, though, and your dentist says it’s okay, try breaking them into small bites instead of chomping into a whole one, and rinse your mouth with water after if you can’t immediately brush your teeth and braces.

Honestly, we suggest you eat the dark chocolate and skip the marshmallows and crackers. But if you crave S’mores, choose dark chocolate rather than milk chocolate, look for graham crackers with less added sugar/artificial sweeteners, whole grain flour and high(er) fiber (at least 2 grams a serving), and try to find low-sugar marshmallows.

Or opt to indulge in things like traditional-style S’mores every now and then. If your oral health is in top shape, and you see your dentist regularly, you can treat yourself occasionally with no worries.

If cost has kept you from the dentist, know that dental savings plans - an affordable alternative to dental insurance - can save plan members 10-60% on most dental procedures. If you want to learn more about how dental savings plans can help you maintain your oral health, reach out to us at 1-833-735-0399.

Show Me the Savings

Dentists recommend 2 cleanings, 2 check-ups and 1 set of x-rays per year. We're so confident that your plan will pay for itself*, we will refund your money if it doesn't. Some exclusions apply

Working Hard
to Make You Smile
That was pretty easy. Look at you smiling.
Calculating Results...

Please wait while your results load.